Kansara seems obsessed with his family. He records and rerecords conversations around the dining table; his grandparents sleeping and moaning and reminiscing, projecting videos previously recorded, onto wall spaces and then re-recording them. The juxtaposed frames are disturbing and evoke a sense of ghostliness. In ‘Don’t Hurry, Don’t Worry’, the woman with the rolling pin appears to be semi-transparent where cupboards and chopping boards seem to pass through her. She is also disjointed through vertical lines formed by the juxtaposed frames; again creating a sense that she is not really there. But her voice is clear and unlike the visuals, the audio is not blurred. The woman rambles; the sentences seem to make no real sense and yet when you connect this, through other videos, the Jhansi ki rani who fought the British is brought into context with the fact that her own father fought the British too.

Gautam Kansara thus suggests that memories are hazy and manipulated to suit the one reminiscing. In this case it is the artist himself reconstructing a past. With few spoken or physical insertions his identity is sketched through the memories he presents. Kansara guides the lens of technology into personal spaces, investigating the nature of the Indian family and its generational experiences impacted by migration. His persistent preoccupation with the same group of people and their story which is repeated with a kind of senility is as curious as it is revealing. He edits tightly, but the conversations appear un-edited as he takes us into his grandparents’ flat in London where people meet and engage, watched by the video camera, sometimes aware and sometimes it seems not.

In Health, Wealth, Name and Fame (Rangpur) Gautam takes us through his journey to the remote village of Rangpur in India, where his grandfather was born. He traces his antecedents to a humble farm and tells us his grandfather made good by virtue of an education. The soundtrack is an amalgam of conversations recorded over 6 years, digitally pieced together, where his grandfather is dreaming of going back, recounting details of his childhood. In Health, Wealth, Name and Fame (Maheshwari Udyaan 1&2,) he unravels history that is buried in the past with his grandmother’s recollection of her father and his role in the Quit India movement and that he has two parks named after him. The fact that they left the very land that his maternal great-grandfather fought for, to migrate to UK – the land of the colonizer that was ostensibly being ousted, is rather ironical. This becomes all the more powerful when we are informed of how proud he was, that he did not attend his daughter’s wedding because he was not allowed out of jail on his own recognizance and refused to go with a warden in tow. He went to jail nine times, was a staunch supporter of Mahatma Gandhi and educated his daughter who then spurned rich suitors “for a graduate girl must have a graduate husband” and both grandparents speak of this with pride.

The recordings are candid but curiously censored, revealing nothing that could compromise the family, nor say much about Gautam or his parents, or who is the vocal, self proclaimed new-age Californian spiritualist etc. I felt as if I was invited to visit and then told to stand on the side-lines while he decides which frame I can see. So while he reveals aspects of the inner sanctum he is not entirely uninhibited about it; projecting selected memories.

He plays with them, overlaying the context; de-contextualizes it and little details make-up a complex collage of the sociocultural moorings of the Kansara family without a deliberate probing for identity. However, one remains unclear about what exactly he is looking for or trying to say within this, for even though selective, there is too much multi-layered material to grasp which makes for tedious viewing. His attempt to present how inseparable we become from the spaces we inhabit doesn’t seem engaging or clear enough. I found the irony of a freedom fighter’s daughter migrating from India to UK before independence was officially declared, to be a curious inheritance for the artist four times removed from the generation of freedom fighters, now living and working in New York; of significant interest at many levels, but this was not investigated enough and one remains uniformed of the impact it had on the father-daughter relationship and more as a consequence of.

Kansara, through his family’s recollection is able to present a rather unique widow into our post-colonial cultural make-up. The videos are engaging at certain levels, and I was drawn to his involvement with an idea that has taken many years, been re-visited and re-recorded and technically manipulated to explore seemingly mundane footage, but he does not make any specific point either sentimental or historic. He is exploring facets of identity and history and through this something that is seemingly relevant to him, but basically he just rambles on without leading anywhere that makes me rethink this information which I already know at an objective/ historic/ social level. What he has is interesting archival material and if he can get beyond the sentimental or go deeper into it, perhaps something of significance will emerge. 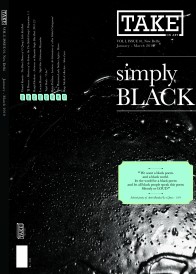