Weighing the Scale: Size Matters or Does it

Size in itself does not count for anything, but in relation to something it can pose a problem, be the solution or become a symbol of appreciation or disdain. Gallery LATITUDE 28 initiates this debate via their inaugural exhibition in Lado Sarai: ‘Size Matters or Does it? I & II’ inviting twenty artists from G.R. Iranna, T.V. Santosh, Baiju Parthan, Dilip Chobisia and Manisha Parekh to Mithu Sen, Niyeti Chadha, Chittrovanu Mazumdar and Pooja Iranna among others, to participate.

The exhibition was presented in two parts and we saw a diversity in visual expression with each artist presenting their concept of size, not necessarily tackling the basic premise of the size of their ‘canvas’ and how the content or intent differed, was inhibited or expanded upon by virtue of size. However, it was interesting to see that for those who worked within the format they usually do, size was secondary to what they had to say.

Mithu Sen brought size into play with reference to sexual intercourse, where she ‘inflated’ the size of the photographed penis of a Classical European sculpture David and played with its form. While appreciating Sen’s unreserved approach in tackling size matters, the debate was a non-starter for her visual presentation did not titillate nor repulse, nor make any statement on sexual satisfaction or lack of it, based on size.

Art today is valued according to square foot area; akin to how property is sold, but large works are also difficult to sell for lack of space to hang them in, especially in private homes. Should either be a criterion for the artist to create, is a question that emerges from between the lines of Bhavna Kakar’s concept note. G.R Iranna addresses this by painting a large and a miniscule canvas, bringing out nuances of size. In the larger canvas [Qawaali, 52 x 198 inches] the imagery is roughly sketched while in the paduka [6 x 6 inches] he focuses on a small part of the front of the slipper with greater attention to detail in the painting of its form, which along with the perspective of the paduka, made it all the more interesting. Both canvasses were treated as objects/pictures of an era gone by and it is the small one that commanded attention, while the Qawaali scene was bland by comparison. God, it has been said lies in the details and here one is inclined to agree.

Manisha Parekh explored facets of a singular idea through myriad presentations. The humbler size is her forte which she chooses not to deviate from. Her use of watercolour and spontaneity of thought are handled adeptly in this scale and by contrast to Iranna’s ‘detailing’ that convinces, Parekh engages through multiple projections, expanding on the brief by suggesting that scale could also be determined by the intensity of thought. Pooja Iranna used the micro-sized staple-pin to build with, drawing on the urban-scape for inspiration. Her steely structures are ambitious for the material she erects them with, but they do not tower and intimidate as do the glass and steel constructions sprouting all over the country. She allows us to view the precision of the building process and hers is all the more attractive for the meditative qualities this embodies while real life sky-scrapers create chaos and cacophony adding to the stress of already frenetic lives. She thus makes a point in favour of a scale that is in harmony with the nature of one’s being.

This is portrayed perhaps the most convincingly in the sparing, delicate works by Niyeti Chadha. White layered on white, with some minimal marks in pencil, where the play of light creates a subtle magic of shadows through overlapping layers of paper, depending on the angle of overlap and where the light source is. Could this kind of subtlety work successfully on a scale five or even ten times larger? The beauty and irony are that like Manisha and Pooja, Niyeti does not even attempt it. However,

if these artists had taken on a deviant scale, we may have had a better sense of the manner in which the content changes and how, if at all.

Drawing from the story of Alice in Wonderland, where size becomes problematic when Alice shrinks too small to reach the key or grows too large to get her head through the door, the gallery concept note suggests that purpose determines size. N Pushpamala who uses photography, had technology at her disposal to enrich the debate by shrinking and enlarging the same image[s] but she presented two different works instead. While the smaller work engages the eye because the artist-protagonist looks straight at you, I am left wondering if this could have drawn the viewer equally, on a larger scale. Would I have been intimidated, or would the moment have been lost?

This comparison/debate is however lost, for the larger work differs in content and unlike G.R. Iranna, does not shed any light on the debate of size.

Does size matter? It depends on what the artist is trying to convey is the inference drawn. Jayashree Chakravarty supposedly looks at the earth as insects prowling beneath our feet might do. In the smaller works she merely examines insects in a semi-biological way, highlighting their jewel-like colours and curiously presenting them as integral to the paper they’ve been painted on but the larger work with its squiggles and scratches makes no sense. If she had contrived for insects to crawl on the paper, their real-time marks may have revealed more than her own banal approximation. The larger work is double-sided and must have posed a technical challenge, but here size is not relevant; the artist’s engagement with the idea appears to be a hindrance to its evolution and disappoints on either scale.

Art these days is often portrayed through some kind of theme, which is interesting but does it serve art’s purpose? Differing from design essentially because there is no brief/theme, artists explore ideas close to their being to reveal perspectives others may not see. The matter of size has not been debated conclusively and while this did not hinder appreciation of some of the work, the exhibition could have benefited by tighter editing. Simrin Mehra Aggarwal presents an obscurely painted connection between an object and its representation in her ‘small’ drawing of ‘large’ machine parts and T.V Santhosh, who usually does large scale work presented only smaller ones. It would have been interesting to see the change in content and texture if both scales had been side by side. Drawing inference from the works themselves is possible only where artists like Iranna have sincerely explored the concept or like Damani, Chadha and Parekh, have worked within parameters of their own preferred scale. 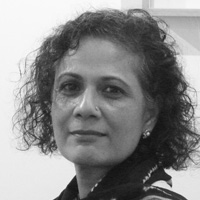 Gopika Nath is a Textile Designer, Fiber Artist, Writer, Poet and Teacher. A Fulbright Scholar, and alumnus of The Central School of Art and Design, London, UK, she lives and works in the National Capital Region.