A Search in Five Directions

‘A Search in Five Directions’ was exhibited at the National Handicrafts and Handlooms Museum, New Delhi, in collaboration with the Devi Art Foundation, from 20th January till 31st March 2018, in honour of Padma Bhushan awardee, the late Shri Martand Singh. The exhibition was curated by Rakesh Thakore, Rta Kapur-Chishti and Rahul Jain. The exhibits were drawn from the ‘Vishwakarma’ series inspired and initiated by Martand Singh. These textiles reflected both classical tradition and contemporary expression and took design to new heights of excellence. The textile series is now treasured in the NHHM (Crafts Museum), New Delhi.

While attending a curatorial walk by Rta Kapur-Chishti, the world where textiles are displayed as museum objects became truly alive. Martand Singh, affectionately known as Mapu, was a visionary; the perspective which he developed with his mentor Pupul Jayakar to revive the history of Indian textiles and find ways to initiate a positive and sustainable working environment among the weavers and artisans through reemployment, was truly admirable.

The exhibition was comprehensive as it brought together a very wide range of India’s traditional textile techniques including pigment-painting, dye-painting, resist-dyeing, printing and weaving from centres across the country. ‘Vishwakarma’ exhibitions held between 1981 and 1991, were produced with the collective support of the office of the Development Commissioner (Handlooms) and the Weavers Service Centres, craftspeople all over the country, as well as far-sighted minds and powerful voices in the government. Even today, after more than 35 years, the impact of those state-sponsored exhibitions is still visible in many textile areas, some of which gained a new lease of life, while others saw remarkable growth.

Each of the ‘Vishwakarma’ exhibitions starting from ‘Vishwakarma-Master Weaver’s (1981), ‘Pudu Pavu-The New Wrap’ (1981), ‘Rasa- The Evoking of Variant Moods’ (1984), ‘Dhaari-The Use of Lines’ (1984), ‘Jaali-Trellis’ (1985), ‘Ksetra- Exploring New Fields’ (1986), Birds and Animals in Indian Textiles (1991), attempted to explore the contemporary relevance of the inherited skills and products of India’s textile artists. As a whole, the textiles revealed not only the trajectory of technical and design developments in hand-crafted textiles in the pre and post-Independence periods, but also suggested new arenas of future developments.

Among the two galleries, the first exhibition area showcased textiles that were intended to project a strong classical/ traditional sensibility but at the same time, suggest something more. They produced a certain sense of excellence, texture, colour and pattern because of their historical reference. The museum-like exhibition format brought these textiles into the wider public domain and highlighted what could be achieved in our time. For this, a number of design devices were subtly applied, which included trimming decorative excess, eliminating strongly contextual images and symbols, and reformatting design layouts to yield a ‘neo classical’ genre of textiles that fitted comfortably into contemporary homes and public spaces. The textiles in the second exhibition area were designed to take these developments further, with the specific objective to create a future for India’s textile arts that have greatly declined in quality and competitiveness. The exhibits reflected fresh explorations in both technique and aesthetics.

The display area provoked the idea of viewers’ participation with the displayed object, especially ikat, the calligraphic bandhas from Sonepur, Orissa. According to sources, there was an Orissan poet who composed diagrammatical poems called Bandhodaya. It is said in Orissa that these puzzle poems were composed as secret messages between lovers. Each composition (textual or pictorial) is called a bandha .The saree from this region derives its motifs from these bandhas. Some bandhas are plain calligraphy (Oriya or Devanagari), where as others are in the forms of fish ponds, coiled serpents, lotuses etc. The pictorial bandhas can only be read by knowing their ‘key’.

Likewise, Padma Pichhavai from Nathdwara, Rajasthan was exquisite. Rectangular in shape, it is bound on all four sides with bands of lotus creepers. The entire field is filled with lotus buds and blossoms, leaves and stems. On the left side is a pair of swans and on the right, a pair of cranes. The lotuses are in various shades of pink, the stems and leaves in shades of green and the water in a pond, grey blue. Flitting black bees activate the surface of this languid painting (symbolising Krishna, who sips the honey from his devotees). In the piece exhibited, however, the image of the icon has been withdrawn.

Textiles in our surroundings are mostly seen in practice as ritual offerings, furnishings and garments but this idea of weaving an exhibition and bringing the collective efforts or initiatives from past as a referential point, helps in rereading or opening up different layers of discourse, even sensitising the eyes and the minds of viewers, who can carry the experience forward. The vision of the project leaders along with a dedicated team can continue the age old tradition of weaving in India, thereby allowing it to secure a position in today’s global context. 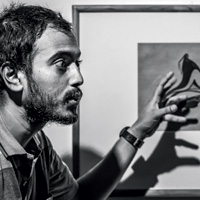