Gobhai started drawing under Chavda, and teaching himself to be a thorough draftsman. Gobhai went on to make hundreds of life-studies, something he continued doing throughout his life. He ensured to inculcate the discipline in drawing, as an intrinsic part of his life. With drawing, came a certain precision, which he sought to infuse in his life as an abstract painter. From there on, he went to the Royal College of Art where he studied graphic design, thereafter returning back to Bombay to work with J. Walter Thompson. When his office transferred him to New York, he decided to quit the design profession and take up being a full time artist. He went on to live in New York for 22 years. He visited India only over long stretches of time. In 1985, however, he had his first duet exhibition in Bombay at Gallery 7, along with the legendary painter, Prabhakar Barwe. It was then that Gobhai felt that perhaps it was time to return home, and he shifted back permanently to his city of birth.

While living in New York, he pursued painting, but also supported himself by graphic designing and illustrating children’s books, which earned him much acclaim.

In 1980, he co-exhibited his artworks with well-known abstractionists at the Bronx Museum. While he was in New York, he developed deep friendships with artists like Zarina Hashmi and Ram Rahman, both of whom became akin to being his soulmates.

Before I knew about Mehlli the painter, I got to know Mehlli the affable, considerably wealthy Parsi gentleman. He was 56 years old – exactly 30 years ago. It was our 25th year of Chemould when I came back to Mumbai, after a year in England. Mehlli would have also recently returned, so I didn’t know him growing up as I knew other artists. He was one of the most amiable men I had met – exceptionally handsome, full of beautiful smiles. My first impression after interacting with him was that he could not be a good artist. I had naively made a clouded assumption that all artists usually have a humble background. I felt that Mehlli must be a nice Sunday painter kind of artist! I remember I was genuinely thrilled when my mother, Khorshed and I visited his studio. It was then that I completely fell in love with Mehlli, the artist. We were all convinced that there was an exhibition in the making, at our little space at the Jehangir. That was the beginning of our professional relationship, something which never took away from the friendship that we shared over the years.

Gobhai was idiosyncratic and there was a guileless indecisiveness about him. The studio visits were a delight. Mornings at Darbanga Mansion with coffee and his little Jack Russel, Kuri – were all about conversations regarding the processes involved in his art. He would stand beside his work and look at it as he would speak about the process. He would rub the well-used rag against the work as he spoke about it. Those who visited his studio would receive a demonstration of where he was able to darken, lighten, rub off, layer, and scour during his process. It was not so much about explaining things, but about just engaging with the person and the work. And then there was always self-doubt that hung in the air – is it complete? He would often have his red string hanging from atop the canvas that he would move wondering if he should shift the line around. This would happen with every work that was put before us at studio visits!

The studio visits would soon turn to exhibitions at the gallery where he would angst over distances between the work (our space was so small that the choices of distance quite minimal!) And then he would start worrying about the lighting. That is when you would desperately desire to take a holiday because of course the fastidious Gobhai never thought the light was good enough. And of course the quality of the lights weren’t up to the mark in those days. He would drive us crazy with Chintamani (our Nepalese gallery helper), adjusting them this way and that, tweaking them slightly. Right through the course of the exhibition, one could probably see him climb on the ladder because Mehlli was never satisfied!

Gobhai will always stand among one of the best abstractionists from India. In the words of Ranjit Hoskote, someone who was “profoundly material, artisanal, workmanlike. His paintings, whether on paper or canvas are built up like palimpsests, through the successive application, removal and addition of layers of acrylic, charcoal, graphite, zinc, aluminum powder and pastel. Through these maneuvers of staining, polishing, paring and burnishing, one layer becomes encrusted with another, sometimes; at other times, a substrate is lifted back into view from later accretions.”1

In March 2019, we will celebrate Mehlli Gobhai, the artist at the National Gallery of Modern Art with the joint curatorship of Ranjit Hoskote and Nancy Adajania along with Jerry Pinto as the associate curator. The exhibition will bring to fore the many layers of Gobhai as yet unknown to the world around. 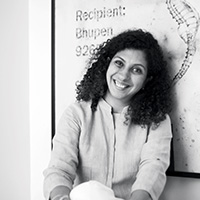 Shireen Gandhy was born into a family of prominent art gallerist parents, Kekoo and Khorshed Gandhy who started Gallery Chemould in 1963. Having been brought up in the company of art and artists, her life has been surrounded with conversations, paintings and dialogues around art. Having taken over the mantel of the gallery almost 30 years ago, Shireen has launched several artists who are now prominent around the world - nurturing and creating a platform for them. Prominent among these are, Jitish Kallat, LN Tallur, Atul and Anju Dodiya among others. She has also worked with museums helping in production of work, acquisitions, working with organisational arenas of well-known biennales and exhibitions around the world.