One does not need a dictionary to understand that a spectre is something which haunts. Karl Marx has made popular the function of a spectre, through his famous opening sentence, “A spectre is haunting Europe – the spectre of Communism.”

This loud proclamation has reverberated through decades and has inspired millions across the world to fight for an equal society. Meanwhile, in Sudhir Patwardhan’s solo show, ‘Spectres’, the spectre is not only haunting, but is also a lingering presence. The spectre here is the experience of home and the experience of others’ homes. In Patwardhan’s own words, “In such homes, where sick people have been taken care of, people have died. They leave behind something in those rooms…You might whitewash it or whatever, but it will continue to haunt…those presences linger.” The recent solo show of Patwardhan is a shift from his much-acclaimed images of everyday life of the bustling city and its public sphere. The noise, commotion, congestion, etc., which are characteristic of a densely populated city like Mumbai, are absent here. The images are not populated with people and vehicles like we see in his works such as Station Road, Death on the Street, Street Corner, etc., or the recent panoramic visual imagination, Mumbai Proverbs. In this set of   works instead, Patwardhan extracts stories and images from his private life. They open a window towards the outside world and evoke an experience of viewing the world through the eyes of a withdrawn person. He impresses our minds with indelible visuals, stillness, loneliness and objects of the household and studio.

The architecture involved in Sudhir Patwardhan’s recent works is not merely about habitations; they are worn out bodies carrying the soft beats of an ailing heart or labyrinths concealing dreams. Unlike many artists, Patwardhan meticulously deploys realism to depict with precision and clarity the isolated life in old age. What sets him apart is the extreme sensitivity with which he renders the subjects. Jitish Kallat, in his conversation with Sudhir Patwardhan observed about the latter’s reading of the body in a wider social context. It is not merely an objective indifferent gaze of a medical practitioner which one encounters in Rembrandt’s The Anatomy Lesson of Dr. Nicolaes Tulp. Patwardhan himself notes that his main impulse, from the beginning, was to understand people and their lives.

In his recent paintings such as Home, Erase, Compass and Inner Room he invites us to secretly observe an individual and an artist’s private life in order to explore the grim corners of this interiority. This transformation from the exterior to the interior was a gradual shift. It reflects the personal choices one has to make at the cusp of old age, and grappling with seclusion that follows. Moreover, in Patwardhan’s case, it also deals with the merging of the studio and home. This change from the outside to the inside, the negotiations of having a studio at home, the transformation of the city and the difficulties adjusting to it, the shifting nature of belongingness in the city, etc. are the sources from where he draws his inspiration.

In his work, the Inner Room, the woman stands close to the window, in silence, as if the twilight pervades and subsumes everything, while the room witnesses the shadows of actions, leading us to frigid corpses lying on the bed in a mortuary of sorts. The room embodies different emotions, multiples of them. His control on perspectives is fascinating. He allows the viewer to enter the frame through various entry points. The framing is horizontal in most of these works, rather than an elevated vertical composition which would have allowed him to depict the monumentality of the city. As Girish Shahane, who has written the catalogue essay for the exhibition and also named the show observes, “The horizontal format is un-heroic and therefore appropriate for the artist’s un-heroic imagination of himself. As viewers, we respond to this vulnerable position of the artist and we cannot turn away from the rooms and the spaces he inhabits.”

The exhibition also features his drawings, self-portraits, and the People Series (portraits of the people he has encountered rendered with utmost sensitivity). His works such as Self-Portrait with Brush and Camera and Self-Portrait with Mirror and Camera draw our attention to the inner world of the artist. He shows us how art making, which is generally romanticised as a solitary activity, can be tedious and exhausting. Viewers encounter a work of art in sanitised spaces like galleries and museums and forget that its genesis lies in these smelly and isolated studios. James Elkins, in his recent book, What Painting Is, talks about the situation of an artist in the chapter, The Studio as a Kind of Psychosis. He notes, “Working in a studio means leaving the clean world of normal life and moving into a shadowy domain where everything bears the marks of the singular obsession. Outside the studio, furniture is clean and comfortable; inside, it is old and unpleasant. Outside, walls are monochrome or pleasantly patterned in wallpaper; inside, they are scarred with meaningless graffiti. Outside, floors can be mopped and vacuumed; inside, they build up layers of crusted paint that can only be scraped away or torn up with the floor itself. The studio is a necessary insanity.” One sees a delicate effort to draw our attention to this fragile life in his work Erase, wherein an amazing reference to Velazquez’s Las Meninas, we see the artist emerge out of the frame. While Velazquez’s masterpiece depicts the young ladies in waiting, Patwardhan crafts the delicacy of old age through a simple gesture. He shows us that the interior world of an artist is vivid and honest, without any pretension. It is an invitation to that lonesome place.

Through these, Patwardhan tells us his own stories, just as he tells the story of a transforming city and isolated lives in each room and in each home. His work, Another Day in the Old City, a panoramic view of the buildings of the city, is actually an invitation to gaze deeper into the hidden lives behind those windows and observe lonely figures standing in the balconies. Sudhir Patwardhan not only conjures up the images that best express this desolation but also gradually invites us to see the city in a different way. As we move across the panoramic frame, our attention constantly focuses on the small details, claustrophobic rooms, insignificant moments and we traverse patiently to visualise the larger landscape again. One cannot help but dwell on those frozen moments that Patwardhan reveals to us. 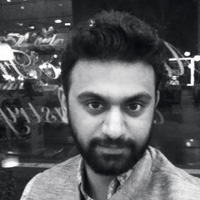 Premjish Achari is a curator and art critic based in Delhi, India. Achari has initiated an independent curatorial platform called Future Collaborations aiming at theoretically and politically informed curation. He is the co-curator of Bhubaneswar Art Trail 2018. Achari currently heads the programme and editorial for the exhibition Lokame Tharavadu organised by Kochi Biennale Foundation and teaches art history and theory at Shiv Nadar University.