Paper has always been ascribed an important space in the realm of the literary, something that has preserved the immortality of words more willingly than any other medium, till the Internet completely revolutionised the way words are consumed. Historically, even the invention of paper, from the Papyrus plant in Ancient Egypt, reflects an attempt to leave written records of civilisations, now remembered only as history lessons. However, the susceptibility of paper, and its mutability, has perhaps attributed to its understanding of an insignificant item of daily use as- only a medium, a surface, to put down records that are personal and professional, individual and communal. Paper then can be seen as a tangible expression of our intangible thoughts, something that cannot be forgotten once penned down. Yet, paper hardly ever assumes the role of an artefact that can communicate stories about cultures, information about trade routes, and knowledge about the development of both literary and artistic forms.

‘Papier’, an exhibition by gallery Art Positive, is an attempt to rescue the materiality of paper from the background, allowing it to assume central focus. With its preview on the 23rd of August, 2018, the exhibition displayed the works of nine artists Aisha A Hussain, Chetnaa, Ganesh Selvaraj, Gopika Chowfla, Jignesh Panchal, Sachin Tekade, Sachin George Sebastian, Sharmi Chowdhury and Sudipta Das. Like the Avant-garde movement that interrogates the so called refined areas of art and culture, the idea of paper as something to be viewed rather than used, creates consciousness and raises questions about the ambiguity of what constitutes art. Sudipta Das, a fourth generation Bangladeshi migrant blurs the stringent lines between memory and history, the personal and the political. Her work, My Land 2, seems fraught with longing and homelessness, reminiscent of Jibananda Das’ ‘I Shall Return to this Bengal’, which highlights the contours of a partitioned Bengal he can no longer return to. Sudipta uses paper not only to mould the physical landscape, but also to etch the fallibility of memory, of what is remembered and what is forgotten. Sharmi Chowdhury’s Tent is the Surnames allegorically deals with the issues of migration and displacement where she incorporates Southeast Asian techniques to heighten narratives and memories of dislocation. Talking of memory, Gopika Chowfla recycles memories, surmounting her paintings on pages of old books. She is able to recreate layers of interconnected memories through her series, where the written word, the anachronistic physical copies of books, and Chowfla’s paintings overlap in a web of history. Perhaps this is how generations survive, not as archaeological remains that have been unearthed centuries later, but as superimposed memories where the past and the future are in fact, two sides of the same coin.

Chetnaa, Ganesh Selvaraj, Jignesh Panchal, Sachin George Sebastian, Sachin Tekade and Sharmi Chowdhury play with both geometry and geography, where the tidiness of lines interlaces with the commotion of maps. Jignesh Panchal’s White is not White captures the minimalist, modern way of living where architecture in itself allows space for voyeuristic glimpses. Windows become gateways to both real and imagined worlds, and Jignesh leaves much to the imagination, where the occupants could perhaps be very different people leading very similar lives. In contemporary urban architecture, where glass replaces bricks and concrete as walls, a visible invisibility is created, captured by photographers like Arne Svenson and Michael Wolf. This transgression of privacy can be read in Jignesh’s work, where structures not only provide a transparent view of others, but also reflect the opaqueness of our own lives. Ganesh Selvaraj creates intrinsic labyrinths where the arrangement of the pieces of paper boards reminds one of the domino effect2. The works can perhaps be seen as an acknowledgement of multiple perspective levels that are often ignored.

Interestingly, the colour white dominates the artworks. White, a spectrum of seven colours, has an eternal and ethereal quality, something which has been juxtaposed with the fragility and vulnerability of paper by these artists. The exhibition then not only highlights paper as an artefact, but also traverses through time, allowing the temporariness of viewing and the permanence of art to coalesce together. Each artwork ultimately becomes a record of historical and contemporary ideas that can survive beyond the duration of the exhibition, even when the material is intrinsically perishable.

1. Bidwell, John, The Study of Paper as Evidence, Artefact and Commodity, International League of Antiquarian Booksellers, 2018

2. A domino effect or chain reaction is the cumulative effect produced when one event sets off a chain of similar events. The term is best known as a mechanical effect, and is used as an analogy to a falling row of dominoes. 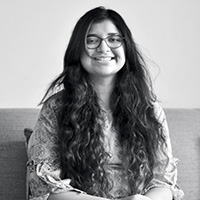 "Suyashi Smridhi has recently completed her Bachelor's degree in English Literature from Hansraj College, New Delhi. As a writer and cultural critic, she has published her works on various platforms like sbcltr.in and Coldnoon: International Journal of Travel Writing and Travelling Cultures. She is interested in exploring concepts of space and borders, trauma and memory, diaspora, and feminism. She is the Assistant Editorial Coordinator of TAKE on art."