“Textile symbolism in India is hallowed by tradition. In the Rig Veda and the Upanishads the universe is envisioned as a fabric woven by the gods. The cosmos, the ordered universe, is one continuous fabric with its warp and weft making a grid pattern. Hence the importance of wholeness, not only of the uncut garment, like the saree or the dhoti, but also of the cloth woven all in one piece, on which a sacred picture is to be painted. Whether as a cover for the body or as a ground for a painting, the uncut fabric is a symbol of totality and integrity. It symbolises the manifestation of wholeness.”

You cannot help but recollect the words of Stella Kramrisch when you walk  into  the  aesthetically-illuminated  spaces of Jawahar Kala Kendra that are presently displaying the ongoing textile exhibition titled, ‘New Traditions: Influences & Inspirations in Indian  Textiles,  1947-2017’. The façade of the stately terracotta-red terraces designed by Charles Correa frame the spacious salons that the exhibition is spread across, chronologically mapping the evolution of textiles and crafts over the decades. Mayank Mansingh Kaul’s curatorial approach somewhat deftly negotiates the roles between artisans, craftspeople, designers and artists. The journeys that the displays are drawn from are often unexpected and compelling, encapsulating historically referenced vocabularies from current motivations and comparative traditional practices. Do we see such textiles as traditional, modern or contemporary? Of the past or of the present? Or, as the title of this exhibition offers, is it a part of new traditions altogether? The exhibition unfolds with a section devoted to khadi and nationalism, the hand-spun and hand-woven coarse cotton, which Mahatma Gandhi made the symbol of Swaraj India. Displayed on the grey-painted walls and beautifully lit, the exhibits are exquisite references of the country’s freedom struggle when the charkha became a weapon in the hands of the ordinary people. The narrative moves to the silken brocades of Varanasi and the weaves that were inspired by Art Deco and Art Nouveau, with the display of abstract patterns on materials as diverse as shawls, garments and sarees. The sheep wool handspun, hand-woven shawl for instance, is a complete contrast to the Assamese chador, delicately spun in Muga silk with intricate silver zari work on it, or the yak and sheep wool hand-spun rupshu from Eastern Ladakh. Amongst the outstanding exhibits, the pashmina’s soft texture is especially alluring, till you chance upon the striking weaves of Nagaland or the stunning Varanasis.

Responses to International Modernism, the next part of the show, has an interesting take on the effects of the West- centric Modernism that introduces elements of abstraction and geometry in textiles. I am especially struck by Prabhakar Barwe’s work; I am reminded of his paintings and his words. The room is still, and like central characters in a play, the works stand in pools of light, waiting for their moment, as it were. “Each shape is surrounded by its own meanings and contexts. For example, a bird in a painting does not merely suggest a bird; it also expresses a certain state of mind. Shapes that refer in this way to something other than themselves are called symbolic shapes.”

Barwe’s words stay in my mind as I wander across the galleries and look at Nelly Sethna’s work, at Riten Mazumdar’s exhibit and at Abraham & Thakore. In a sense, this is what defines the exhibition for me, the fact that Kaul can explore the curatorial purview with such dexterity, when he proposes the idea of designers as necessary interventionists for craftspersons.

Whether we agree with him or not is our prerogative. In his note, he says, “While this contributes to the emergence of new forms and uses of craft, it has equally and consistently degraded the inbuilt instincts of innovation and improvisation in craft, whether these be transmitted through lineages of artisan families or the dynamics of markets and demand.”

We hear more on this subject when we meet Ajit Kumar Das, at the following seminar, who shows us his brilliant works, where ancient tradition renders fluidly to the contemporary. David Abraham, Rajesh Pratap and Gunjan Jain, whose works were   a part of the story also shares inputs on the evolving traditions. For a viewer, the experience of participation was heightened when you walked past Manisha Parekh’s stunning work, A Secret Within, and stood before Sharmila Samant’s Factory-Made Saree. The unexpectedness of seeing a saree created with used bottle- caps and metal shackles in the midst of wondrous weaves, was a brilliant ploy to put the narrative of the show in focus.

We next made our way to the section called Minimalism, where the exhibits were mainly about fashion and home furnishings. It was a dazzling display, given the salon was lit by silver moons and other garments fashioned in liquid metal. Anavila’s Honey Summer Zari Striped Saree competed for our attention alongside Rajesh Pratap Singh’s svelte and chic Silver Shirt Dress & Copper Suit. Especially eye-catching was Neha Puri Dhir’s Yellow River in muted colours and an aesthetic principle, which you have come to recognize as the artist’s oeuvre.

Finally, in a show this grand, it was crucial to have the right person to design the exhibition and Reha Sodhi was every bit the woman for the job. I enjoyed following the trail of the flamingoes, a leitmotif that quietly found its way in the salons, even as a motif that was being developed on a work table. It was only when one came across the exquisite aakho garo hand embroidered saree with its row of beautiful flamingoes, dating back to the early 1900s, from Ashdeen Lilowala’s collection, that the curatorial perspective reiterated itself in one’s mind. The thread that ran through the weft & warp of the show was the trail of the magnificent flamingoes, as a motif about to be embroidered and then as a finished pattern on shawls and the saree, completing the narrative structure of the show.

All images courtesy: The curator and Jawahar Kala Kendra, Jaipur. 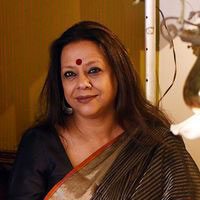 Ina Puri is an arts impressario, curator & writer. In her capacity as a film producer she won the National Award for her documentary on Manjit Bawa.