Capturing the Real Beyond the Reel

“Photography and the cinema are discoveries that satisfy, once and for all and in its very essence, our obsession with realism”.
– André Bazin (What is Cinema? Volume 1, pg. 12)

With the dawn of Realism, Western painting was torn between the expression of spiritual reality and the need for the imitation of the world the eyes behold. The quest for attaining the illusion of exact imitation left the forms of plastic arts exhausted, until they were redeemed firstly by Niepce and later by the Lumiéres- Western painting was once and for all freed. The lens, the basis of photography, in French is called objectif. As distinct from painting, the core essential of photography lies in its objective character. For many photographers, this objectivity became an aid for them to view the world.1

“I must admit, the camera is no longer outside my existence, distinct from me, it is a part of my person. Just like sensory organs. I can see many things better with my eyes behind the lens”2– Nemai Ghosh

An amateur’s desire of pursuing documentary photography has brought in display a rich archive of what lay beyond the reels in the pioneering filmmaker Satyajit Ray’s films. ‘Satyajit Ray and Beyond’ brings to us a plethora of fragmented insights into the world of cinema. Each photograph archived and put together in this exhibition curated by the Delhi Art Gallery in a non-linear narrative, spills not a concrete chronology, but documents the different methodological pursuit of Ray, along with his crew during the making of his feature films. Though the exhibition omits Ray’s venture into documentary cinema, shots from the feature films by Nemai Ghosh, extends the scope of understanding Ray’s process of filmmaking. The glimpses into the making of Asani Sanket (Distant Thunder, 1963) Seemabaddha (1971), Jai Baba Felunath (The Elephant God, 1978) and City of Joy (1992) among others, widen the reading of the auteur to the rest of the crew. Direct stills from the films such as Goopy Gyne Bagha Byne (The Adventures of Goopy and Bagha, 1968), Jana Aranya (The Middleman, 1975), Shatranj ke Khiladi (The Chess Players, 1977), Hirak Rajar Deshe (Kingdom of Diamonds, 1980), with others, form a part of the exhibition.

Ghosh’s black and white photographs installed on the white walls of the Nehru Memorial Museum and Library, Teen Murti House in New Delhi feature a tripartite of Ray and his interactions with the crew members, stills from the films and glimpses into the sets and shoot-locations.

Two photographs of the veteran actor, Sharmila Tagore, however break through this assemblage and create a refreshing nook in the exhibition—“On an off day during the shoot of Aranyer Din Ratri, Nemai Ghosh in his own words, was ‘kidnapped’ by Sharmila Tagore who asked him to do a photoshoot with her. She was the first professional actress who asked Nemaida to do so.”3 The largest of all the photographs, this portrait was installed in the middle hall of the exhibition space. The other photograph of Sharmila Tagore during the shooting of Seemabaddha (1971), stands as evidence to Ghosh’s practice of capturing objective reality and establishing himself in the realms of photo-journalism in the cinema world. “While Sharmila Tagore’s character never goes into the salon in the film, Tagore the actress spent a leisurely afternoon there while Nemai Ghosh took photographs, seen reflected in the mirror taking a picture. The photograph appeared as a publicity still in Junior Statesman”4. Nemai Ghosh’s photographs provide an insight to the entire production process of the films circumnavigating Ray.

As the quintessential biographer of Ray, photographer Nemai Ghosh has contributed to the discourse of India’s cinematic and photographic history and hence created an invaluable extensive archive through Ray and his films a part of which is put forth in this exhibition. Many of the exhibited photographs portray the filmmaker engrossed with the actors in practising a scene or eating with his crew members on the sets, interacting with a child-actor, sketching in isolation, or lost in a room full of musical instruments or recording outdoor sounds at the Howrah Station. The photographs, not only restore objectivity in time, but vividly display the essence of Ray’s engagement with his works- his indoor and outdoor experiences with people, with sounds and machines. The filmmaker’s engagement with sound has recurred in many photographs that were exhibited, like the one where Ray is at the busy Howrah railway station in Calcutta, holding a sound recorder on the location of his film- “the impetus on aurality was profound in Satyajit Ray’s films. The deft amalgam of sound and musical score was inextricably linked to the visual narrative and was often employed to strike connections and continuities”5.

The resonance from each photograph produced a common score, which furthers the scopes of visualising the real behind the reel in snippets, from the bygone film world of the filmmaker. Though Satyajit Ray and Beyond’ narrates through a disjointed montage of images, but this is what keeps the celebration of archive alive. Each photograph has an individual story to tell where as each of them also forms the large narrative- the narrative by auteur Nemai Ghosh. 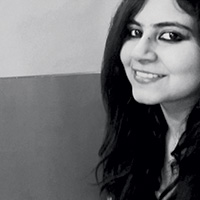 Shrinjita Biswas has a B.A in History from Jadavpur University, Calcutta. She completed her first Masters degree in History from the Centre for Historical Studies and second in Arts and Aesthetics from the School of Arts and Aesthetics, both from Jawaharlal Nehru University, New Delhi. Her interest lies in research, pertaining to gender, politics and technology in cinema and in theatre. She is affiliated to Sahapedia as a researcher and curator for short-term projects and is engaged as a scriptwriter for theatre productions. She is currently the Editorial Coordinator of TAKE on art.