A Model for Invisible Growth

‘Hangar for the Passerby’ is an ambitious curatorial venture by Akansha Rastogi, compiling artistic and non-artistic material from over 45 institutions, groups, and individuals, spanning over eight decades from 1930 to the present. Conceived over a period of three years, it brings into conversation several large collectivist formats, including other exhibitions such   as ‘Santhal Family: Positions around an Indian Sculpture’    at the Museum of Contemporary Art, Antwerp (2008) that concerned itself with mapping the enduring legacy of what’s touted as India‘s ’first major modernist public sculpture‘ – Ramkinkar Baij’s Santhal Family (1938) – by inviting a range of contemporary Indian and non-Indian artists to produce meditations on how this iconic masterpiece relates to different art histories whilst offering a unique vantage for approaching the complex Indian politico-cultural milieu1. ‘Hangar for the Passerby’ incorporates this citation in the form of a new commission by LN Tallur, Time Capsule, designating a cairn of ponderous concrete moulds of Baij’s sculpture that greets the visitor at the museum entrance. Irrespective of how one views Tallur’s work, be it as an act of deconstruction of the modernist legacy or a preservatory measure guaranteeing its replication in time, it successfully initialises and binds discrete swatches of temporalities lived and confabulated around Baij‘s sculpture, transpiring the first among the several instances of coalescence of artistic practices that the exhibition sets out to chart. The scenography of the hangar, primarily a place of storage, unfolds further as one winds her way through the installation College Backyard, a project initiated by Paribartana Mohanty with art students from the state of Odisha, originally conceptualised for the Students’ Biennale (Kochi, 2016). The rubble-strewn corridor with its unfinished plaster casts, broken busts, and fragments of moulds fused with trash invokes, what another curator Natasha Ginwala describes as the ‘discarded materialism’2 characterising the peripheral spaces around sites of artistic production that serve as registers for shifting practices, a cinematic time-lapse of lived materiality, an ontological rut produced by movements of generations of artists gathered over a formalised activity in space.

Through a number of interventions similar to the College Backyard, one witnesses a sustained curatorial commitment to a re-evaluation of differential values accruing to ‘stuff ’ in an institutionalised art context as well as a steadfast foregrounding of artistic duration and processes as opposed to the finished product of such collaborative ventures.3 In the words of the curator herself, the exhibition “accumulates and stirs up various durations, events and formats of working together, scenarios and phases. In exploring what a collective body is and how it moves, it begins to imitate the growth of a bonsai, that is, a model for an invisible growth.”4 By resigning a neat taxonomical and teleological logic in favour of a cultivated ’messiness‘ and aleatory alignments befitting an overgrown hangar, the exhibition manages to effectuate ruptures in linear-historical time, thereby drawing forth a plenitudinous repository of non-canonical practices and informal (even forged) exchanges.

The ‘hangar’ successfully instantiates its audience as the transitory passersby who can delimit their engagement according to their availability of leisure, contextual knowledge, and predilections. The anachronistic and fluid approach to curation, not only does away with traditional hierarchical frameworks officiating distinctions between arts and crafts, but also enables generative slippages across the exhibited contents, sometimes with interesting outcomes. Thus, for instance, Pablo Bartholomew’s black and white photographs of various art parties, addas (popular haunts) and formal and informal gatherings from the 1970s and the 1980s are juxtaposed with Amitesh Grover and Arnika Ahldag’s ftafka’s Castle, one of the four new works featuring a series of prints made from staged surveillance feed that engender musings about the notions of productivity, attention, and idleness through a string of utterances and provocations created during their 8-month long ‘employment’ at one of the largest software firms in India, HGL (which also happens to nest the museum).5 Elsewhere in the show, Ram Rahman’s elegantly framed black and white photographs glimpsing at the private gatherings of renowned personages like the Hindustani classical singer Shubha Mudgal, the Urdu poet Kaifi Azmi, and the photographer Raghubir Singh are laid parallel to, somewhat disturbingly, the laminated, frayed, and yellowing pages from Rajeev Sethi’s unpublished manuscript Three Stones (1978) detailing plans for a (failed) social housing project ‘Anandgram’ for the Bhule Bisre Kalakars (literally forgotten and bygone troupers)6. These pages as valuable documents of the everyday life and craft of a disbanded community of artistes make other appearances as well, as does the College Backyard, turning a corner and spreading to the interstitial cavity created by the gentle incline7 that roughly bisects the exhibition. This bestows the show with a certain promiscuity and a performative structure, where the different episodes and conglomerates leave their respective confines to intermingle with their neighbours, emphasising the formative forces, working principles, and commonalities amongst collectivisations in general, as well as the collaborative effort subtending art production at large, whether acknowledged or otherwise. This is not to say that the curation comes across as lazy. Far from it, its highly mediated display and painstaking attention to detail is evident from renderings such as ‘The Souvenir Shop’ which ‘conjures an altered vision of art practices of 1960s and 1970s‘ through the fictional exchanges and produce of the Group 1890s8  Art Centre. Located at the heart of the exhibition, the section manages to highlight and suture several cross-generational frames and para-artistic sites of production such as the Baroda Fine Art Fair (MS University, Baroda)9, Weavers Service Centre (Mumbai) and the Cholamandal Artists Village (Chennai) in an elegant manifestation that brings to mind the surrealist expression attributed to Comte de Lautréamont: “As beautiful as the chance encounter of a sewing machine and an umbrella on an operating table.” This has been achieved through a set of scattered polygonal cafeteria tables (that come together to form a perfect rectangle) designed by Akhliesh and   J Swaminathan (around 1982) for Bharat Bhawan (Bhopal) bearing an eclectic display of letters, sketchbooks, hand-made toys, textiles, print-making folios etc. generated over the years by the peers comprising Group 1890 under different contexts.

In another place, the ‘Sarai Reader 09: The Exhibition’ (2013) curated by the Raqs Media Collective is indexed through a column of stacked copies of the conjunctional publication P.T.O.10. Similarly, artists and pedagogue Sanchayan Ghosh’s radically critical Monogobbet Society at the Visva Bharti University (Santiniketan, Kolkata) is represented through an elaborate diorama complete with videos, sketches, placards, and a live bonsai, reenacting a nonsensical expedition to identify every tree that has been planted on the occasion of the annual Vriksharopan Utsav (Festival for Afforestation) ever since its inception by the legendary founder Rabindranath Tagore some 80 years ago.11 As such, the exhibition proffers another reading of itself that concatenates alternate pedagogical practices such as the Monogobbet Society, Sarai Reader 09, the nomadic performance  art  festival  – Art Karavan International organised by Inder Salim (2010), Desire Machine Collective’s delocalized studio Periferry based off an expeditionary vessel on the Brahmaputra, Open Circle an exchange platform founded by Sharmila Samant and Tushar Joag in 1998 that sought to relocate artistic discourse outside the White Cube, WICITY TV which transmitted subversive programming through  a  local  channel  as  part of an artistic intervention into the World Information City conference (Bangalore, 2004), Umesh Madanhalli’s three- day workshop entitled ‘Name and Form’ with the students of CAVA (Mysore) which revolved around the ludic activity of tending to a pack of donkeys en route to a breeding village, and Grover and Ahldag’s open desks at HCL Technologies as part of their intervention Leaky Folds. The exhibition unfolds itself towards all these significant episodes of experimental, interdisciplinary pedagogical undertakings, withholding and revealing these to the itinerant passerby with its wave-like movements. True to its elliptical form and deterritorialising logic, ‘Hangar for the Passerby’ continues to grow into fresh configurations and episteme with the periodic accretion of new works. With each visit the exhibition seems to grow in ways that are imperceptible and strange much like the bonsai it emulates, folding and curling inwards, concealing and proffering its multitude in kaleidoscopic perspectives, baffling and beckoning by turns. 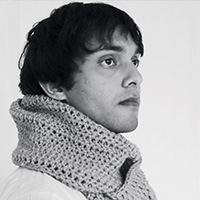 Adwait Singh is an independent curator based in New Delhi and the former Assistant Editor of TAKE on art. His work as a scholar- curator frequently weaves in and out of areas of inquiry such as subjectivity formation, gender and sexuality, posthumanism, contemporary techno genesis and ecofeminism. His recent curatorial works include an exhibition entitled 'G/rove' (Feb 2017) at Latitude 28 that examined the mythopoetic imperative of non-anthropocentric modalities of planet sharing, and another investigating the possibility of a body-based historiography at Shrine empire Gallery (New Delhi, 2018).