The Oratory building sits at the northern edge of the iconic and imposing Liverpool Cathedral. Built in the extravagant Greek Revival style, it serves as the perfect home for a newly commissioned work by Austrian filmmaker Mathias Poledna. Filled with luscious imagery drawing from art and literature, this plaintive work reflects on a romanticised obsession with 20th Century European Modernism. The films follow the melancholic day of a French soldier, who eventually collapses under the weight of apparent ennui. Trapped within a world that is excessively beautiful and pleasurable on the outside, yet incapable of producing real joy, the films seems to echo the title of the 2018 Liverpool Biennial, ‘Beautiful world, where are you?’

Featuring 40 artists from 22 countries, and spread over 15 venues across Liverpool, this 10th Biennial edition asks artists and audiences to reflect on a ‘world gripped by deep uncertainty; a world of social, political, economic and even climatic turmoil.’1 This curatorial intention is evident in the presentation of works like Banu Cennetoğlu’s The List, a public artwork which names 34,261 documented deaths of refugees and migrants trying to enter Europe since 1993; or the films of Aslan Gaisumov, which ruminate on the pain and memories of the forced migrations of the Chechen people. Closer to home is Rehana Zaman’s collaboration with a collective of young black women filmmakers from Liverpool. Explored from three perspectives, the film charts the disappearance of a teenage boy and the experiences of a group of non-white, Muslim youth as they navigate their adolescence, while trying to simultaneously grapple with the city’s authorities and their own cultural heritages.

While social responsibility and curatorial activism are the calling cards of any global mega-exhibition today, the Liverpool Biennial manages to create an experience that is emotionally provocative, without becoming instructive or overbearing. There is a sense of artistic integrity and conceptual experimentation, while the relatively formal exposition of medium and material seen in many of the works, creates a Biennial that can still be accessed by a general public. Like Poledna’s work in the Oratory, several of the projects are neatly integrated into iconic public venues across the city. Installed in the former prisons at St George’s Hall, Inci Eviner’s animated film Reenactment of Heaven, shot against the backdrop of Istanbul’s hills, is a playful rumination on the contentious place of women in heaven. In the Playhouse Theater, Reetu Sattar presents Harano Sur – a droning, meditative film showing 30 harmonium players, caught in a melancholic and endless trance as they continuously repeat the seven notes of the instrument. A documentation of a performance originally made at the Dhaka Art Summit in 2018, the work is a reflection on memory and the violent loss of language, motifs, which recur through several moments in the Biennial.

This year co-curated by Kitty Scott of the Art Gallery of Ontario, there is a significant presence of work by indigenous Canadian and Australian artists. The works are primarily on view at Tate Liverpool. While one is treated to the delicately-rendered wall drawings by Dale Harding, the sculptural pieces by Duane Linklater and Brian Jungen produce a more affected reading of their ethnic origins. Notable amongst them are a roomful of pen and coloured pencil drawings by Canadian Inuk artist Annie Pootoogook, which reflect on the daily lives of the Kinngait community of Northern Canada. The childlike, flattened visual planes show scenes of domesticity – women cooking traditional foods, children watching TV, and more harrowingly scenes of alcoholism and domestic abuse. Hidden within the narrative is the tragic and mysterious story of Pootoogook’s own death in 2016, which indicates the ongoing isolation of such indigenous communities, despite their recent recognition and inclusion into international Biennials and global art exhibitions.

Alongside Pootoogook, Eviner, Cennetoğlu’s and others, it is women who ultimately rule the Biennial. Veteran Belgian filmmaker Agnès Varda is highlighted at FACT gallery, with a commission of new work alongside a curated film programme. In conversation with Hans Ulrich Obrist during the opening weekend, the 90 year old artist delighted audiences with her unique approach to documentary cinema and experimental display formats. This style is evident in Ulysses, presented in the FACT entrance room. The work pairs a photograph made in 1954, with a 1984 film that recollects the making of the photographic encounter. Focussing on the central figure of Ulysses as a young boy and then a grown man, the film is a poignant and painful insight on how and why we remember. Simultaneously, Pakistani filmmaker Madiha Aijaz shows three films that also interrogate the idea of memory, although here through the politics of language. These Silences Are All the Words presented at Open Eye Gallery, is a journey through Karachi’s dying public libraries, and the slow and silent erasure of written and spoken Urdu. Over at the Playhouse Theatre, Aijaz’s Brown Sahib and the Pomeranian (2017) focuses on an unseen figure narrating a tradition common to both Pakistan and India – that of addressing one’s dog in English, no matter their otherwise native or spoken language. A more humorous perspective on the subject of language politics, the short films evokes the spirit of a Biennial – in which the viewer is left with enough space to draw their own conclusions. 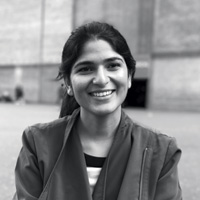 Sitara Chowfla is a curator and researcher based between London and New Delhi. She is currently pursuing an MA in Curating Contemporary Art at the Royal College of Art. Her current research focuses on the emergence of alternative, radical curatorial and artistic platforms in South Asia.