The first FLAME  Artist Residency, 2018 organised by the FLAME University in Pune, Maharashtra as part of the community outreach programme, shared ideas of participation, collaboration and dialogues. Initiated by Gauri Gandhi, faculty at the FLAME University, the 21-day artist residency inaugurated on 8th January was awarded to artists Garima Gupta and Roshan Chhabria, who  in the subsequent days, presented their ideas  and conversed about personal experiences  and inspirations. An Open Studio talk was conducted by FLAME faculty member, Ashutosh Poddar for the opening ceremony. Presentations were also given by the two residents discussing their forte at length. The conversation was followed by presentations, which unfolded the artists’ creative journey, response and understanding towards art.

Gupta, a researcher and artist associates with ornithology, topographical alteration and correlation between the human and wild put forward an alternative expression. Her documented study and artworks trace patterns of the continuing historic destruction and environmental catastrophe through imperialist iconography and modern South Asian psyche. Her solo show ‘Minutes of the Meeting’ was exhibited in Mumbai in 2017 and became a part of curator Cosmin Costina’s show ‘A beast, a god and a line’at the Dhaka Art Summit 2018. The Gujarat Lalit Kala Award, 2008 and Nasreen Mohamedi Scholarship, 2009-10 recipient Roshan Chhabria has been collaborating with leading art galleries in the nation. His solo exhibitions are exhibited in India and abroad. Chhabria’s artworks project the mundane life of the middle class household and their aspirations. The artist recalls humour in human existence, which he tries to portray in his work by visualising the world from a middle class perspective. The two artists with their respectable approach exhibited artworks on the concluding week of the residency; thematically based on fabric.

Four eminent personalities from different genres and expertise in the field of arts were invited to speak and shared their thoughts. The guest talks were followed by open discussion with the audience constituting  of students, faculty, art enthusiasts, etc.

Artist, art historian, curator and art administrator, Suresh Jayaram communicated the essentiality of public and private art spaces in nurturing of varied art practices. He elaborated on the role of residencies that has led to build a positive communion. Leading contemporary artist Manish Nai, emphasised on his artistic oeuvre, discussing the importance of jute and discarded fabrics. Latha Tummuru, alumnae of  the National School of Design, who has also extensively written about the challenges faced by weavers of Andra Pradesh and Telengana, enlightens the community about he same. Tummuru further pointed at the gap between market and weavers, deficient incentives, requirement of handlooms, and endangered art practices.

The residency was concluded with the exhibition opening on the 29th January, 2018. Bhavna Kakar, Editor-in-chief at the TAKE on art magazine and Founder- Director of Gallery Latitude 28, was invited  as the chief guest of the event. The works of both the artists were displayed at different spaces within the campus periphery. The work of two artists in the exhibition stood as stark contrast. Gupta’s work illuminated Southeast Asia and the undergoing cataclysm of the region’s natural reserves and wildlife. The intense work on fabric, hung over a water body looks at the issue through a wider socio-political and colonial stand. Contradicting to Gupta’s work in terms of aesthetics as well as sentiment, Chhabria produces comical works depicting the monologues of salesmen through text in his illustrations. He tries to document the experiences, reflections and preferences of the middle class society in terms of consuming fabric. Chhabria puts forward his exhibited works as a memory of his father’s tailoring shop, his interaction and observation of the customers.

On the successful completion of the inaugural FLAME Artist Residency, Gauri Gandhi in her press note states, “As an art educator in a liberal education university, my role is  that of initiating the art process in students’ lives. The need for students to indulge in the art making and creating a connection with art made me initiate the FLAME Artists’ Residency. Students and colleagues not only witness the process, the art works created during the residency adorn the campus and continue to engage the community forever.” After the success of the FLAME Artist Residency, 2018, the university invites young visual artists, photographers, video artists and performing artists to look upon the complexities of departure for the upcoming FLAME Artist Residency, 2019. 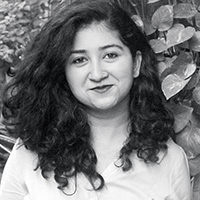 Ayushi Koul has completed her Masters in Arts and Aesthetics from Jawaharlal Nehru University and has a Bachelor's degree in Journalism from the University of Delhi. She has been a part of independent theatre and film projects as a writer, actor, art director, and artist coordinator. She has contributed for Times of India, Round Table India, Delhi Post and other online platforms. Her academic interest lies in the complexities of performativity of name and body, which she tries to investigate through Dalit and performance studies.