Fly on the Wall #22: Reminiscing The Lahore Biennale 2018

This spring of March took me to Lahore to be part of the first Lahore Biennale. A trip to Pakistan always carries a plethora of emotions for me. The anticipation of the trip, leading to the much-awaited day when I put my feet on the soil of what was once home for my parents is always overwhelming, to say the least. And flying out from Pakistan is also accompanied by the same wrenching feeling one can possibly get when leaving home, not knowing when one would return.

The fact that this is my fourth trip in the last twenty years doesn’t change the way I feel before, during and after the trip.

Old friendships with artist friends only adds to the warmth and love one receives across the border. I have been photographing Indian and Pakistani artists for many years now. The project ‘Artist through the lens’ has allowed me to meet fellow artists in their creative sanctum, their ‘studio’. The ongoing project of photographing artists from both sides of the border led to the project “Postcards from Home’. It was recently shown at the Shahi Hamam in the walled city of Lahore, at the Lahore Biennale, in March 2018.

‘Postcards from Home’ explores the nostalgia of love and loss of artists from both sides of the border. The artists photographed by me over the last few years for my ongoing project ‘Artist through the lens’ have a shared history with pre-partition India either directly or through their parents or grandparents.

In this set of 47 postcards (the year of India’s partition), they have explored what tugs at their heart when they reminisce the memory of the home lost.

Being a part of the biennial also gave me the opportunity to see the other works of art housed in some amazing historic venues in the city of Lahore.

These venues like the Lahore Fort, Shahi Hamam, Mubarak Haveli and Lahore Museum, all witnessed unprecedented crowds as the curious Lahorians thronged them, making it truly a people’s biennale.

The two weeks that followed the inauguration at the Lahore Fort took me back to the first Kochi biennale in December 2012 in India. I felt the same pulsating energy. Even lapses (??) were being seen with gentle eyes and hearts. After all, it was the very first biennale of Lahore, a city known as a jewel that ought not to be missed according to folklore in my part of the world.

The biennial team toiled hard making each day special. It was a magical fifteen days breathing creative energy into the city. 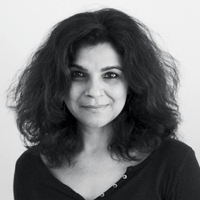 "Manisha Gera Baswani is a painter and a photographer based in New Delhi. An insider to the Indian art world, she has been photographing artists and those who cross paths with them for almost 15 years. Her ongoing, self-funded project Artist through the Lens has been shown by institutions in India such as the Devi Art Foundation and the Kiran Nadar Museum of Art. She has recently embarked on the Pakistan leg of the project."