There they stand, in black and white – we say, omitting grey – in colour, in the light, exposed, but withdrawn behind their eyelids, into their own personal, elected blackness. Perhaps an act of resistance, but like blind women, they are entirely open to the gaze, the photographer’s gaze, our gaze, a white gaze, with blackness at its heart. What kind of black is that? A lordly black, as in Lord Lytton who, in the face of famine in India, insisted that the market for grain was self-regulating. It was, in the long term, if you accept the decimation of your consumer base, that is. With record grain exports to Europe, minimal government expenditure for emergency famine relief and the food needs of those who received any aid at all calculated at less than the SS considered necessary for inmates of Buchenwald, it was a triumph for the mathematics of blackness. Millions of dead. Oh, that black. Yes, that black. An ivory black, made of charred bones. A more transparent black than pitch black, jet black. The outlook is black? You think so? Then let’s take a break, and talk about measurements with afternoon tea (black), do you take milk? But doesn’t white light contain all colours? Yes, true, but does white understand that or does it merely cause discomfort because it cannot contain black too, not a single drop? White enlightenment also imagined weighty categories of the mind, filling skulls with lead shot to measure their cranial capacity, taking measurements of the distances between eyes, before extinguishing the light behind the others’ eyes, leaving a long legacy of blackness in our minds?

Since the 11th century, the white knights of the West, the phonetic contradictions of their name sitting lightly on their shoulders, have had the discourse of colonisation in their baggage, thanks to the legal mind of a Pope and subsequent proponents of a notion of natural law based on power politics and prejudice – the right to divest people(s) of their property, freedom and lives because ‘they are in error and we are on a righteous path’. They were supposed to be fishers of men, but it transpired that meant they either brought light to wayward souls or sent them to the devil, a strange mission statement indeed. To ignore history is to divest the present of contextual meaning and there is a lot of political meaning in that loss of meaning. So although this knowledge is (almost) lost in the inky depths of a past millennium, it is ethically connected to the economics of Black slavery, with the balance of trade, the figures preferably in the black. Against that, putting people on show as specimens of this or that exotic culture is a minor misdemeanour – just as long as the books show a profit, in the black, again, (not in the red) – Meet me in St. Louis, Louis, at the exhibition of Ota Benga, one of the Twa people from Central Africa who, weighed down by the black depression of cultural isolation and lack of respect, committed suicide, later, (thank God) in Lynchburg.

Society took the phonetic implications of the place name lightly; after all, hadn’t they dealt with entire cultures, red, not black, with murderous efficiency, a black stain in the chronicles of nation-building mythology. Is it simply an oversight that Black theorists omit to theorise red though? It seems that here the camera – pointed only at Austria but aimed at the Western world – is concerned with capturing the blackness of the society that invented it, so that in denying it its normal role of registering images to underpin the status quo, it is given the task of exposing cultural presumptions. Even Shangri-la (oh, what a lovely landscape) is subverted. The photographer has gone native, if only for a symbolic instant, sitting by a black effigy that signifies the legacy of the blackness she has inherited. The ghost of white is a black shadow; the spectre of black is a white ghost. As every painter knows, black contains all colours, and it is not substantially altered by one drop of white. But does black know that? 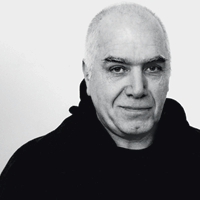 Tim Sharp is a visual artist living in Vienna. He has produced films, photography, installations and is also working as a curator. He has had extensive exhibitions in Austria, Canada, Germany and Poland. Recent publications he has written for Cap Manuel (Wieser Verlag, 2008), Logbook 2006/2007: A Bulgarian Journey (DVD ROM, 2008) and Hidden Histories: Remapping Mozart (DVD ROM, 2006) both together with Lisl Ponger. Recent films he has been involved in are The Green Bag (2007); The Mozart Minute (2007) and The Trapdoor (2005).