Realism as a Metaphor: Retrospective of Rajan Krishnan

“Change is permanent. Change is both growth and decay. My present works are sort of painted documents of change.” ~ Rajan Krishnan

Rajan Krishnan (1967-2016) the Kerala-born and -based artist, met an untimely death, leaving a vacuum within the artist fraternity of the country, particularly in his home state. Two years after his demise, an exhibition of 33 of his works was put on display at the Durbar Hall Art Centre, Ernakulam. The body of works constituted two oils, three charcoal drawings and the rest included his most preferred medium of acrylic. The exhibition was organised by Vibhuraj Kapoor of Gallery Beyond, Mumbai, in collaboration with the Kerala Lalithakala Akademi between the 3rd and 12th of April, 2018. Of these, 25 works were from the collection of Vibhuraj and six from Renu Ramanath, Rajan’s wife. Vibhuraj had been collecting Rajan’s works since 2004, when they had first met and struck an empathetic relationship, until the artist’s death. Vibhuraj says, “I met Rajan for the first time when he came to a workshop we organised in 2004 at The Oberoi, Mumbai. He was shy and hid behind two large charcoals all through the week. On day five, he asked me for a canvas and paints. The work Tested Apple emerged overnight and also broke the ice, so to say, and we talked. This was the first canvas he had painted after six years of just drawings and watercolours. He was well read, well informed and eloquent. Tested Apple was the first indication of the direction of his work towards landscapes. The changing landscape of Kerala, altered due to the havoc caused by urbanisation and globalisation, became the leitmotif of his work, which he recreated with his inimitable palette of greys, greens and blues with definitive black and white lines that alluded to decay. I knew Rajan for too short a time, 12 years – then the Gods got jealous! The best works of Rajan executed during this period were vested with Vibhuraj, enabling a fitting tribute to an exemplary artist, who has changed the contours of contemporary art scene in Kerala.

Exhibited over two floors, the large and medium sized canvases projected the artist’s trajectory, developed from his black and white drawings and paintings to his monochromatic canvases which extended to colours later on. The exhibition also included his extensive writings and sketches from his diaries and notebooks, written while he was recovering in hospital and later, at his home in Irinjalakuda. On his way to recovery he said, “I have a strong right hand, a strong mind and strong friendships, and so I can draw’. His thoughts were written in a consistent, neat and fluid calligraphic hand. The making of art proved therapeutic, for he felt the healing properties of colours and drawings, which made him optimistic and confident. These works added another dimension to Rajan’s persona, making his conceptual process palpable.

Rajan invested his emotional energies in the subject that he celebrated through his art such as, the environment of Kerala. Working through the visual language of realism, he turned his works into metaphor, conveying a deep-felt anguish at the loss of rural environment, through agents of change and development like urbanisation and industrialisation. The thematic contents of his works sensitively negotiated the abundance and depletion of nature, powerfully dramatised through hyper- realistic imagery that would impact the viewers’ sensibility. He had intuitively developed an innovative artistic repertoire to convey his concept of dynamic change and transformation. Besides realism, his methodology constituted the technique of articulating with whites and off-whites, generously applied as surface textures, in order to denote change. The inherent concealed light emanating from his canvases was metonymical, an intelligent manoeuvre, used to provoke a closer scrutiny of nature that he desired. Inherently, his compositions had a strong sense of design; visually enhanced by the decorative character. But seminally it was the dominant trope of memory that served as a reservoir for his expressions and impressions, particularly that of his hometown, Shoranur.

Rajan, with a B.FA from Trivandrum College of Fine Arts, went to Baroda to pursue his post-graduate studies, after which he returned home. Having worked as a printmaker in Baroda and together with his initial experiences in illustrations and design, he began creating black and white drawings that eventually extended to paintings. Initially, he marginalised colours to explore the environment and the changes, which man and technology have wrought. Later, his palette developed out of the colours perceptively absorbed from his surroundings. In the painted landscapes and urbanscapes, he made a conscious effort to remove human presence, which he felt to be a detrimental destructive force. His large canvases manifested a deathly eerie silence, akin to surrealists’ paintings of dreams and fantasies. His works initially echoed the native landscape of Shoranur, but later extended to other geographies in the state, thereby giving emotional valence to his works. He said, “In any society art was required as a marker of its growth and depletion. My thinking still revolves around this fact – the two complimentary aspects of life: growth and depletion. I did not return to Kerala for the love of roots or for the repelling sentiments of nostalgia”.

His return to Kerala was to paint, explore and experiment with subject matter, visual repertoire and techniques, to establish his individual signature. It was his committed dedication and passion for art, which translated as a stimulating force, intensely investigating his surroundings to find meaning in it. Rajan’s works were autobiographical and conveyed the power of thoughtful simplicity. It reflected life’s philosophy of growth and depletion, change and transformation, optimism and pessimism, highs and lows, sublimating obliquely his experiences and feelings. Elements from landscape were arbitrated to serve as protagonists as the rocky outcrop in the Substances of Earth or jackfruit trees in Memorial, migratory birds in Passage of Wind. These served the duality of celebration of nature on one hand and protest on the other. His methodology was further enhanced by the large-scale paintings, an affinity developed from his student days when he said, “I like the painting to look at us more than we looking at the painting”. His paintings pay attention to the changing landscape, which in collusion with his personalised topography generated awareness of loss and hence attempted creating ripples of awareness.

A true son of the soil, he remained rooted in Kerala. His subject matter like his persona was simple and unassuming, painting the tapioca plants, jack fruit and mango trees, the innocent sparrows, the railway tracks, memories from his childhood and adulthood serving to give a catalytic conceptual edge. His imagery reflected the local and the personal, transcending geographical concerns. His last unfinished work was Fairy Fences – two large canvases of the diptych representing a rose plant in bloom, marking his optimism towards life and love for art.

All images courtesy: Gallery Beyond, Mumbai. 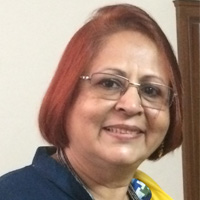 Ashrafi S. Bhagat is an art historian, critic and curator. An Associate Professor, she teaches both Indian and Western Art History. She has written extensively about modern and contemporary art for various art magazines in India. On an invitation from NGMA Bengaluru, she curated an exhibition, Regional Modernity: Madras Art Movement, 1960s to 1990s, in March 2017. She was the recipient of the Brew Magazine 'Women's Achievers Award' for her contribution to Art History and Art Criticism (2016). She was the Guest Editor for a special issue of MARG Magazine, Contemporary Art in South India.