A gateway, a parcourse, and an end yet again: a recurring trope.

The aspirations are clear: the dazzle of the city lights blind even the far-flung dwellers. Tunnel after tunnel is traversed in search of the romantic source that allures, that promises, that builds, more, and more, and, snap!

“The city is magnetic. People want to come with dreams and hopes. Like the village, the city is romanticised in a big way, and that is what draws people.”1

Anoli Perera, through the aesthetic presentation of a seismically-invading catastrophe, charts and delineates city experiences, megacity narratives, urban entropies, cultural inequalities, contradicting empathies, searing wounds, ethnic aggressions, diseases, and surveillance – as a consequence of a sense of clashing utopias. Individual and collective awareness and exposure to the memories of past comforts is the basis for the many utopias, and aspirations abound: numerous narratives are gathered from the same truth. The soliloquies are a distant murmur. The groan of the urban machinations engulfs the dissenting voices, and weary bodies stoop low to be trod upon. The influx and efflux are interminable, while the distress is embodied by the victim: the body becomes a site for memory. Catapulting towards an already approaching apocalypse, accelerating bodies become the source of constant negotiations. Thus the picture of the city is made.

“When we talk about the communicability of pain, we ask whether it is possible to communicate one’s experience of pain to another person. In other words, is the knowledge of private objects such as pain only possible for the individual subject, or is it communicable?”2 Additionally, how often can the depth of pain, experience and memory be translated or represented? Is this representation comprehensive unless itself being a shared memory?

Migration and displacement injects the dual sense of belonging and unbelonging: a new space and an alien land devoid of all the familiar objects of association only attached to past memories; perhaps new faces, new neighbors, new members. An assortment of objects from the past that might have traveled with one may still remain, but even these displaced objects lacking in familiar organisation are unrecognisable, when set against new backdrops. Yet the little left of the memories fettered to these objects is regurgitated, while the reality and veracity of the present situation lie in the surrounding new environment, thrusting a teasing tongue at the lives of the displaced. In this new situation, they unbelong yet belong, with memories being the only mediating connection between a desirable past and the trauma of the present.

‘Janus-faced’ expounds the dual aspects of the city: the alluring and the dismantling. Janus, the two-faced Roman god of entrances, doorways, transitions, exits and ends, remains imperceptible as he materialises within the blind monotony of the mechanised settlement. Nothing stands firm in the presence of Janus: omnipresent and presiding over every pattern of event, the gradual disruption seems to be the cause of this perpetual confrontation.

“Everybody who comes into the city is a migrant.”3 Working with a diverse set of materials and mediums, Perera delicately weaves in stories of the personal and collective journeys of the displaced. Contemplation stems from the queer consolidation of characteristic material choices, each element reeking of deliberation and willfulness in its organisation. The works are layered with detail to stimulate visual tactility; reading into its meanings and making personal interpretations becomes an inexhaustive process.

Elevated Utopia III and Elevated Utopia V represent in a cluster, the disparate elements of the organic and the geometric, the rigid and the soft, juxtaposed, to challenge its own complexity. Installed at an elevation on the wall, both the works maintain three comprehensible horizontal registers: cartographed cushions composing the middle ground; heavy aluminum human legs, flaring outwards like roots in the shadowed void of the underground; and fragile hand-painted paper cutouts of towering sky-scrapers contained within reflective contours on the upper ground.

Speaking of a generic human type confined to dreams of luxury and comfort, the works pronounce the perpetual scuffle of routinised physical labor behind the scenes of imagined grandeur, power structures, and the constitution of the city, while the façades retain their outer radiance. The cushions are analogous to the notion of the clouds aimed for, with vertical habitation tearing through their fabric: “when one is on the cushion it is a comfort zone of hope that others cannot see, as if they are in the clouds. Cities have a tendency of going towards the sky and the clouds. All the people are migrants who have been removed from their roots; people in here are rootless and not grounded. It has an elevated sense.”4

The City Series I and The City Series II plays on the generation of ‘sameness of thought and action’5 by curiously converging the installation with reflections of itself in mirrors installed within the acrylic display box. Perera freezes this monotonous slice of experience, aiding the landscape to extend beyond its limits through mirrors. Symmetry as a consequence of this reflection evades a sense of the horizon: camouflaged in the distance, one cannot see it any longer. Wax and oil, smear the facades, polluting and begriming, and degenerating in its approach. “With the ground becoming smaller and smaller, everybody is on their rooftops.”6

“…what we call our civilization is largely responsible for our misery, and we should be much happier if we gave it up and returned to primitive conditions… in whatever way we may define the concept of civilization, it is a certain fact that all the things with which we seek to protect ourselves against the threats that emanate from the sources of suffering are part of that very civilization.”7

A convoluted psyche, the body, its memories, its transit, the voyage and the despairing seeker, are vehemently betrayed with Long Walk. Starkly different from the rest, the installation is a vertical plane of photographic instances from the floor to the ceiling. Primarily constructed using colored bundles of fabric and integrated with magnifying convex lenses, the photographic narratives come into view only when espied through the looking glass. Photographs of numerous events of displacement and exodus are preserved, within whose framework the recurring image of legs play protagonist in order to maintain the collective identity. While each cloth-bundle is a personal asset and a store-house of memories of lived experiences, the lenses are windows to these lives, allowing the onlooker to perform as the voyeur; a critique of the role of social media is made.

The witness to and the passive surveillance of the chronicles of the other across virtual mediums, re-generates the argument as to whether the representations of pain and distress are indeed comprehensive, unless personally experienced.

What happens within these megalopolises is anybody’s guess. Contention, designation, identity, incongruity, subverts the desire for fair living and smothers the mortal and his material. The Shroud encapsulates the cityscape with its black elastic bands; like a chronic virus it stretches its tendrils to reach down to five light boxes displaying collaged photo prints pertaining to these issues: the visuals are now muffled. The slow invasion takes up the length and the breadth of the room; the black mass reeks of industrial produce, of rubber and synthetic waste. With a sense of approaching clouds, of black rain, and doom, the city purges, urging the remainders to go on yet another journey by foot in search of a new utopia.

“Allegory honours representation’s promise that trauma can be communicated – its commitment to the image of death is simultaneously a commitment, however conflicted and provisional, to recognition, to the past’s value for the present.”8

Smoke arises post the dousing of the flame, the city turns to a heap of debris; puttos and cherubs fly atop missiles, swing flails, play their tune, while dystopia canvasses the cremation ground. Allegory plays just.

1.  Excerpt from a personal interview with the artist, March 2018, New Delhi

4.  Excerpt from a personal interview with the artist, March 2018, New Delhi

9.  Pearce, Susan M.ed., “Objects as Meaning; or Narrating the Past” in Interpreting Objects and Collections. London: Routledge, 1994 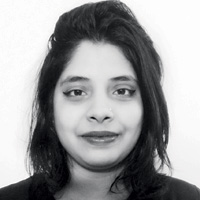 Shalmali Shetty has a BVA in Painting and Printmaking from the Faculty of Fine Arts, MSU Baroda (2015) and a MA from the School of Arts and Aesthetics, Jawaharlal Nehru University, New Delhi (2017). Concurrently working in technical art capacities and writing about art, she is currently the Associate Editor for Art Dose. Her research interests include museum histories and their changing display ethics, questions of interactivity and the contextual politics of curation. She intends to coalesce her practice and theory in the production of the curatorial.