A shoutout to Bombay’s culture vultures! It’s that time of the year to put on your artsy sneakers and masks and head out for your annual dose of art. The city is all set to launch its tenth edition of the gallery weekend with a gamut of artists: from the modernists, Akbar Padamsee and Vijay Shinde, to the contemporary, Saju Kunhan, Desmond Lazaro, to name a few. Twenty-four art institutions are part of this four-day preview.

Here is a curated list of 10 must visit art shows this February 2022:

Venkanna’s quirky embroideries explore the dualistic relationship between pleasure and pain. His hypersexual imagery builds fantasy narratives that blur the line between illusion and allusion. Swollen breasts, erect phallus, hairy arm-pits, queer intimacy, and many more such unconventional tropes redefine the notions of sex, gender, and identity in a contemporary society. These ‘embroidered paintings’, as Sonia Nazareth calls it, provoke the audience ‘to reflect as keenly on the medium, as on the aesthetic of what they are seeing.’

Transcending through predefined notions of historic eras, Lazaro’s solo show unveils a study on the cosmographical universe. This universe encapsulates a vocabulary of astrological motifs from the infinite constellation, waxing and waning moon to positioning of the planets and zodiac signs. Simultaneously, Lazaro delves deeper into a spiritual quest. Meditating on the Vastu Purusha Mandala, the geometric forms reflect on the structure of the archetypal human form, Purusha. These body of works can be interpreted as an ideal parallelism, the internal-external cosmic order, and, in Nancy Adajania’s words ‘the atman with the brahman, jiva with Shiva.’

This solo exhibit explores Kunhan’s ancestral history of displacement, migration, colonialism and conquest. Reminiscing the past, through oral narratives, the artist eternally etches these blurred memories on teak wood. These pieces, thus become a visual documentary mapping Saju’s imagined past with a hint of the relevant present. In the words of Kunhan: ‘I am connecting my works to the politics and power as well as the environmental concerns.’

His repertoire extends a homage to the refugees in Zaatari refugee camp, Jordan as well as the deforestation of the Amazon forests. Kunhan’s works urge viewers to introspect on the notions of displacement and migration at large.

The neo-classical space is all set to launch Despont’s third solo show. Creatively engaging with nature and its myriad forms, Despont’s drawings hover between sacred geometry, esoteric symbols and essentialised forms. Her pastel hued and balanced composition imbues a sense of serenity. Eventually, these therapeutic patterns resonate with the beholder and become a source of healing.

‘Portraits of Intimacy’ interrogates the overlapping trajectories between line and space, wonder and wander. The complexity of the composition leaves a wavering thought on the notions of identity—puzzling the form in the formlessness or conversely, abstracting the formlessness from the form. The experience thus derived creates an enigmatic world, allowing the viewer to share intimate moments and feel the art come to life.

Art Musings gardens a world of densely woven installations that extend the personality of the artist in being. The laborious act of collecting, knitting and weaving translates into tensions that stress and strain, de-construct and reconstruct, and are static but dynamic. Punctuated by plastic tags and strings of fabric, Dixit’s larger than life installations insist on defying patriarchal taboos. The juxtaposition of the bold red cotton uterus with the blue mandala (embedded with black seeds) introduces a contemporary take on the Tantric tradition of worshipping the yoni or Sakti’s vagina. The show blurs the line between myth and rituals, icon and taboo.

The exhibition, a transcendental journey on its own, explores Vijay Shinde’s bhakti towards eternal Shiva. Like Shiva’s tandava, Shinde’s strong bold brush strokes dance on canvas leaving a powerful impact on the viewers. Common shaivaic motifs such as the third eye, crescent moon, aniconic lingam, etc form an integral part of the late artist’s visual vocabulary. His renderings try to discover the divine force that drives within us—the invisible yet omnipresent.

Jhaveri Contemporary has transformed the gallery floor into a mythological playground. A little Picasso-esque and a little Souza-esque, these psychedelic guards make an eye-to-eye contact with every viewer. They seem welcoming and fierce at the same time. Guardian figures or demonic creatures, Nithiyendran’s sculptures present a contemporary take on South Asian myths. According to Nithiyendran, ‘Queer politics, zoology, idolatry, anthropomorphism, monumentality and popular culture feed into my conceptual visual language.’

Shrivastava unravels chronicles of mystery and awe hidden beneath layers of robust impastos. Illuminating from the dark, these subtly defined forms and acts extend across the length of the canvas, almost claiming the space. The neon effect illumination—browns, teals and blues—thus enlivens every rock, tree, smoke cloud, and stream within the frame. Above all, these creations are, as Ranjit Hoskote called it, ‘celebrations of painterliness; they are in Wölfflin’s sense, malerisch.’

10–‘Where Do We Come From?’ — Sosa Joseph at Galerie Mirchandani + Steinruecke

Sosa Joseph’s childhood memories lie beneath the layers of purple, the swirls of pinks, lush greens and blue washes. Joseph was born and raised in a riverfront village in Southern Kerala. This riverine became Joseph’s point of departure for umpteen memories in his countryside life. The artist recalls multiple people and events that unfolded by this river. While the composition vastly varies in scape and scope, one element continues to populate her canvas: the depiction of blurred but exaggerated anonymous figures. This leaves back a sense of the uncanny and awe as viewers encounter these landscapes of memories.

From Despont’s meditative world to Nithiyendran’s psychedelic playground, the tenth edition of Mumbai Gallery Weekend has something in store for all art connoisseurs. Mark your calendars from 10–13 February. Enjoy your gallery hop! 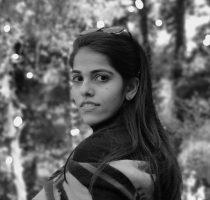 Urvi Kothari is the founder of Inside the White Cube,  a digital collection of art reviews, shows, and general commentary pertaining to the art world. Kothari is also Gallery Manager at Tao Art Gallery, Mumbai and currently pursuing a diploma in Indian Aesthetics from Jnanapravaha, Mumbai. Her interest lies in modern and contemporary South Asian arts. She is currently researching on emerging trends and practices in this progressing Indian art scene.