‘74 million million million tons’ is an exhibition about the types of evidence that artworks can produce opens Ruba Katrib and Lawrence Abu Hamdan’s curatorial text for their new show at Sculpture Center. It is worth situating this ambitious premise within the ongoing global rise of evidence and a concomitant shift in its meaning. The sudden popularity of evidence in the art world is a reflection of larger processes. We are today surrounded by devices and control systems that ceaselessly produce statistics, metrics, data, all increasingly banal traces of something or the other. At the same time, governance and development rely increasingly on evidence, in the form of data, to direct the ways in which they shape our world. Asking questions of evidence in this context is a fraught endeavour, and the show repeatedly brings us up against our basic assumptions in an emergent world.

Daniel R. Small’s Animus Mneme approaches the history of human interventions into time. The eclectic range of videos and objects have in common a scalar elasticity: they are all ways of seeing and hearing that stretch our understanding of history and autobiography. Three objects laid out on a table – a cast of a human hand and two 3-D printed shards of rock with digital protuberances – present morphological resonances across time. In one video, Bina 48, a ‘sentient robot’, remembers a nightmare she has about a miscarriage she had four months into her pregnancy. A few minutes later she talks of her future evolution into achieving “transcendental superbeing status” (on a time scale of hundreds of years). The nightmare and the dream are connected, only we are not sure exactly how.

This sense of the connectedness of things without any certainty of how is symptomatic of our networked era. It is a suspicion that both calls for and resists evidence. As such, it is a cornerstone of this show. But this is also an alienating affect, and the show occasionally produces it too thickly. Some of the works, particularly in the cellar-like basement – Nicholas Mangan’s Ancient Lights series, or Sidsel Meineche Hansen’s His Corporate Cunt Art – seem only tenuously related to the other works. Though frustrating, this is a sign of the difficulty of the task the curators have taken on: we have no language yet to speak about much of this.

Two works by artist and theorist Susan Schuppli make up the most conceptually-rich section of the show. Commissioned for this show, Slick Images and Nature Represents Itself together tackle the 2010 Deepwater Horizon oil spill in the Gulf of Mexico. Like Small, Schuppli brings together a range of different materials, each its own type of evidence: satellite imagery, an audio recording of a lawsuit, a CGI simulation of oil on water, doctored images of British Petroleum’s crisis response and large prints. The work is informative, but it also pushes towards a new theory and practice of representation. The oil spill is not only an ecological catastrophe but also, in Schuppli’s unorthodox presentation, shockingly beautiful. It is a means by which nature represents itself, displacing the human being as artist and witness. Schuppli’s radical reimagining of the world and our place in it points to a way out of the double bind of big data and the anthropocene.

Framing the show in terms of evidence allows for productive re-readings of some works, as with Hiwa K’s video View from Above, which was developed for documenta 14. Alongside a video of a CGI rendering of a city made of white blocks, a voiceover recounts the story of a refugee M and his experience of applying for asylum. If M convinces the interviewer that he is from a city J, he will be granted asylum. He studies the map of J, and is eventually able to answer the questions about the city. It is the maplike knowledge of J as it was seen from above, not the actual lived view from the streets, that convinces the authority. Hiwa K’s witnessing is not forensic or evidentiary in the normal sense. The Kafkaesque narrative works at the level of archetype, hence the visuals of the city that accompany the narrative. This is not a computer reconstruction of any particular space but a simulation that clutches at an ur-form of how our world is ordered.

The impulse in all the works is investigative, but rather than presenting the outcomes of the investigation as knowledge, the exhibition hosts them as a series of warm intensities. This is the show’s biggest strength. It undoes our received notions of evidence (and research-based art practice) as coldly informative. If the evidence can be imaginative, affective, embodied, so too can the world it speaks of. 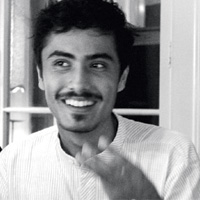 Mila Samdub works as a curator at Khoj International Artists' Association in New Delhi. He has a BA in creative writing from Bard College in upstate New York. He runs the Instagram feed Delhi Modernism, an affective archive of modernist architecture, which he grew up around. He is interested in space, borderlands and queer temporalities.