As part of TAKE TALKS series, TAKE on Art presented ‘The Murals of K.G. Subramanyan’, a public lecture delivered by art historian R. Siva Kumar and moderated by writer and editor Skye Arundhati Thomas at ‘Breaking Ground’, the first Indian Ceramics Triennale on the 16 November 2018. The lecture is a part of the Critical Writing Workshop conceptualised by Bhavna Kakar.

“As a modernist, Subramanyan wanted the image to be autonomous in expression. Images, he realized, are intrinsically concise and not apt for narrative or discursive communication. But Subramanyan’s experience as a designer and his collaborative work at the Handloom Board taught him how shared process and visual terminology could still help in creating a wider communication frame-work. Subsequently, as he began to expand his practice beyond the studio- gallery nexus, he also realized that an illustrative book or a mural cannot be as hermetic as an easel painting; that they would lose their purpose if they were not accessible to a wider public.” 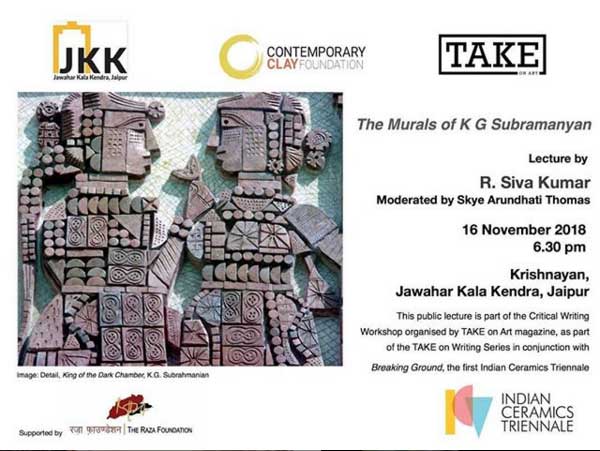