A girl standing in a mustard field looks straight into the camera; she is wearing a summer dress over which is put a suicide-bomber’s vest. As we pass by the photograph, the girl slowly dissolves and we are left watching a collage of black and white and bright yellow flowers surrounded by a garden wall. The second part of the diptych called Sohni Dharti shows a woman ‘wearing modern clothes with a flavour of traditional Pakistani dress in the drape of the scarf around her neck’¹ smiling audaciously while approaching us. It is a repetition of the previous composition; both photographs show the artist herself.

Looking at the space of the image and its method of production, what comes to mind is the significance of Photoshop collage. “As we work with software and use the operations embedded in it, these operations become part of how we understand ourselves, others and the world. Strategies of working with computer data become our general cognitive strategies.” ²

The idea of Lev Manovich on how our interaction with new media has caused a new cultural logic plays a vital part in the conceptual thought behind Farida Batool’s lenticular prints Sohni Dharti I & II.

Manovich points out how electronic art from its outset in the 1980s was founded in reworking of existing materials (or as he puts it – signals). “Culture no longer tried to ‘make it new.’ Rather, endless recycling and quoting of past media content, artistic styles, and forms became the new ‘international style’ and the new cultural logic of modern society.” ³

The 19th century European notion of the artist as romantic genius creating his masterpiece from scratch out of his imagination has long come to pass. In Pakistani contemporary art, this breaking with the idea of the romantic artist is less significant. In this particular context the mentioned ‘transcoding’ and remixing of information with its origin in a global development is also building on a local painting tradition.

Let’s look at the work of Farida Batool’s contemporaries, a generation of artists who use the idea of collage, remixing and transcoding in their practice. If we look at the painting practice of London based Faiza Butt, she re-samples media images with pictures from her direct surroundings. Butt translates the multiple photographic sources into a blending decorative painterly surface; the provoked clash comes with a time delay.

Likewise, but in a much bolder and definitely larger format does Rashid Rana combine clashing imagery. His computer generated digital collages pick up the grid-pixel relationship and the quantification of the digitized image. X-number of media images of the Iraq war make up the pixels in the grid of the Schwarzenegger-warrior image we see when first approaching the digital print.

Less obvious in this company might be the work of Imran Qureshi. His abstract compositions may evoke memories of impulsive Cy Twombly, but except for a superficial aesthetic resemblance they have a very different conceptual background. Qureshi’s miniatures are minutely constructed layers or samplings of media and references. In his work Imran Qureshi brings together ideas behind computer generated images, modernist photomontage and Mughal miniature tradition of copying and reworking iconic imagery.

Like Farida Batool, these artists present their artistic positions as a critique of their society, mass media and international politics by way of reworking and incorporating imagery available to them in history and the media.

To come back to the girl in the suicide-bomber’s vest which presented itself to us so uncomfortably at the beginning of this article. The image is a Photoshop collage of a childhood photograph of the artist to which the vest was added. She slowly loses her legs; the image of the girl ‘deletes’ itself when we pass by. Her grownup sister steps out of a garden leaving an explosion behind. “To use the terms of Roland Barthes, we can say that if modernist collage always involved a ‘clash’ of element, electronic and software collage also allows for ‘blend’.” 4

In the work, ‘clashing’ and ‘blending’ of imagery happens on several levels. Farida Batool explores her image in relation to her country. Her work is a self-critique and accusation in one, and the argument fluctuates from hostile pride to bitter reprobation as we move in space. She offers no clear viewpoint or statement and leaves us with an uncomfortable feeling but also the freedom of multiple possibilities of interpretation. 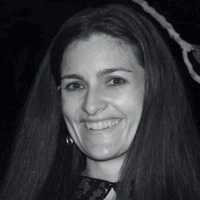 Sophie Ernst is a visual artist who explores architecture in relation to memory and cultural relativity in works that mix video projection and sculptural installations. She lived and taught in Lahore, Pakistan for several years and is currently a doctoral candidate at Leiden University. In 2008 her work was part of the Pakistan Pavilion at Art Dubai. Ernst showed HOME at the Sharjah Biennial 9 and was awarded the Golden Cube for her multi-media installation at the 26th Kassel Dokfest.